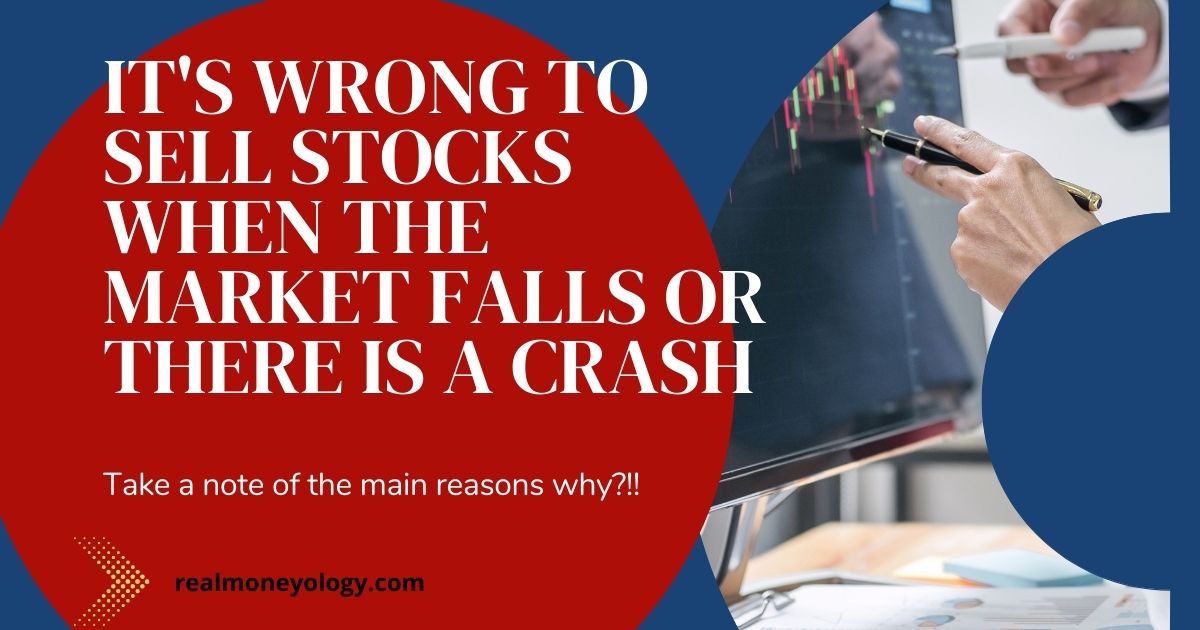 Why It’s wrong to sell stocks when the market falls or there is a crash?

The stock market has witnessed a lot of crashes in the past and the turnaround of its performance has always made the patient investors happier. It has always been found that the investors who remained patient during those tough times became the ultimate gainer from the stock market. Not a single investor, including Warren Buffet, has saved from such severe market crashes. His patience in those hard times made him one of the richest persons in the world.

“Cash combined with courage in a time of crisis is priceless.” — Warren Buffet

In the last 18 months after the lockdowns due to the COVID-19 pandemic became easier, the market has seen a tremendous uptrend continuously. That caused the market to become slightly shaky over the past few weeks. And, this caused the investors to become fearful that the market is going to crash shortly.

Analysts around the world or the headlines are highlighting that the market crash is near that is increasing your fear more. However, the reality is that no one can predict a market crash or market recovery.

This fear in your mind has started to make you feel that selling the stocks of your portfolio can be better than holding them and seeing negative returns regularly. If it is the case, please halt! Give a 5-minute read to this article to know why it’s wrong to sell stocks when the market falls or there is a crash.

What are the stock market crashes and their causes/effects?

The stock market is said to be crashed when the primary index falls a lot on a single day or is going down for several days, weeks, or months. As you may be aware that the major indexes in the US stock market are the S&P 500, Nasdaq, and Dow.

For the last 40 years, all bull runs have witnessed a major market correction that lets the market consolidate for reaching the top highs. Whenever the market falls more than 10% for successive days, weeks, or months, then it is referred to as a crash.

Now, one doubt that may come to your mind is the reason for a market crash. In simple words, the fearful investors are the major causes for market crashes because they transform into sellers when the market goes down causing it to further go down.

If you are reading this, then please never be one of them!

Apart from that, any unexpected event in the world can also be a cause for a market crash like the Covid-19 pandemic. One of the popular market crashes happened in 2008 when the Dow index became down by 777.68 points on 29th September. It is marked as the largest point drop in the entire history of the New York Stock Exchange till then.

Usually, after a long bull run, the stock market suffers from major crashes. It’s the investors’ greed for profit booking and panic for the market going down on one day that causes the market to suffer.

These crashes make the market bearish and it is a major source for recession. Companies grow their businesses through the stock market and hence stock market crash forces the companies to lay off their employees to increase their revenues. Thus, the overall economy of the country suffers due to market crashes.

What should be done during a market crash?

It’s wrong to sell stocks when the market falls or there is a crash. Unfortunately, most people fall into this trap of selling stocks during market crash out of the fear that their entire capital will vanish. But, if you sell stocks during a market crash, it implies that you are selling them at lower prices.

Hence, it’s wrong to sell securities of your portfolio when the market falls. Following the bearish trend, the market again starts going up and your losses will easily turn into profits. But during this turnaround, sellers usually get afraid and don’t buy anymore, rather leave the stock market.

So, they end up making losses in the stock market and term it as a gambling game.

Let’s now dive into the major reasons which will clear your doubt on ‘Why it’s wrong to sell stocks when the market falls or there is a crash.’

Why it’s wrong to sell stocks when the market falls or there is a crash? | Major Reasons

If you try to understand the inner meaning of this statement, it means that you should be positive when markets are negative and vice versa. With this being said, let’s go through the three major reasons why it’s wrong to sell stocks during a market crash.

It’s quite understandable that people want to exit from their holdings during a stock market crash because they are frightened of losing more money. However, history has proved that the stock market has always turned around after a bearish market, no matter however severe it is. And, that is when the patient investors get their losses recovered and achieve massive profit in the long run.

Thus, always keep in mind that a bear market is a temporary thing and the stock market can never be continuous whether it is up or down. So, never be frightened about the market falls or crashes because to get five times your invested capital, a 40% decline must be faced.

You may still feel insecure thinking that the future can be different from what happened in the past, but the regular stories of market crashes can’t be ignored. Hence, instead of being afraid, keep cash in your hand to buy some best company stocks during market crashes to get more handsome profits.

There is no way to time the market –

This statement has a huge inner meaning and it’s very important to fully understand it. It’s very hard to time the market and hence you as an investor need to find out the best days of the market each year.

J. P. Morgan took an example to make this understand with clarity. An investor who is fully patient and stays invested continuously with only 10k dollars in the popular S&P 500 index for 20 years can easily make it 30k dollars. But, if that investor misses those best days every year, he/she could have made below 15k$.

Hence, during a bearish market, don’t be a seller and become a buyer. Because buying in market crashes can help you to lower your cost and gain more when the market turns back to being bullish. Let’s take an example where two friends decided to invest in a stock ‘X’,

Second-year (Due to some reason, market crashes and declines 40%)

Third Year (Bear market ends and Bull Run started. At the end of the year market gained 100 % from the previous year.)

Therefore, it’s quite clear that averaging out increases the profit during the bull market and also helps to minimize the loss during the bear market.

No problem for long-term investors

Do you have investment planning for 20-30 years? Then these ups and downs hardly matter because the long-term performance will not be affected by the market volatility as such. Keeping your goal fixed and a well-diversified portfolio is what matters more for long-term investors.

There should be no place for emotions like fear or greed for long-term investors. If you invest a certain portion every month, then it’s better to continue but during market downturns, have a plan to reallocate your investments in the asset classes.

For instance, if you are investing 80% in stocks and 20% in bonds during Bull Run, then reallocate them to reach your target because hedging is important to balance your portfolio. Thus, never think of selling stocks if you are a long-term investor.

These are the three main reasons why it’s wrong to sell stocks when the market falls or there is a crash.

Can selling stocks help to protect your money?

Yes, it is a smart strategy to sell stocks before the market falls or stock market crashes and not during that time. But, this is an ideal solution because no one can predict the market, and market crashes can happen anytime.

If you are an expert in the short-selling strategy, then you can always do that. You can sell the stocks at higher prices before the market crash and wait for the market to go down. Then you can reinvest at lower prices to achieve massive profit once more.

However, this strategy has a lot of risks involved in it as one wrong prediction can make you face severe losses. For instance, you predict a market crash is knocking on the door and you sell off all your stocks. But the market continues its Bull Run and never crashed. You can’t even reinvest at that time because stock prices are already higher than that what you sold earlier. So, instead of booking some profits, you have to invest more money.

Hence one wrong prediction or market timing can cause a disaster. Therefore, it’s better to avoid these strategies and keep invested in the stocks during market crashes to benefit in the future. According to me, smart strategy is to buy in market dips.

You can also try to leverage the advantage of hedging that can help during market crashes. For that, gold can be a perfect hedge option to protect your portfolio during market downtrends.

We hope that you have liked this entire series and found it quite useful. This guide is to make you concerned about the major trap that most people fall into, that is, converting themselves into sellers.

Thanks for spending your precious time with us, enjoy investing!

Consider Reading below too!

Top 10 Best Cryptocurrencies to Invest in 2022

10 Proven Techniques For Investing In Crypto